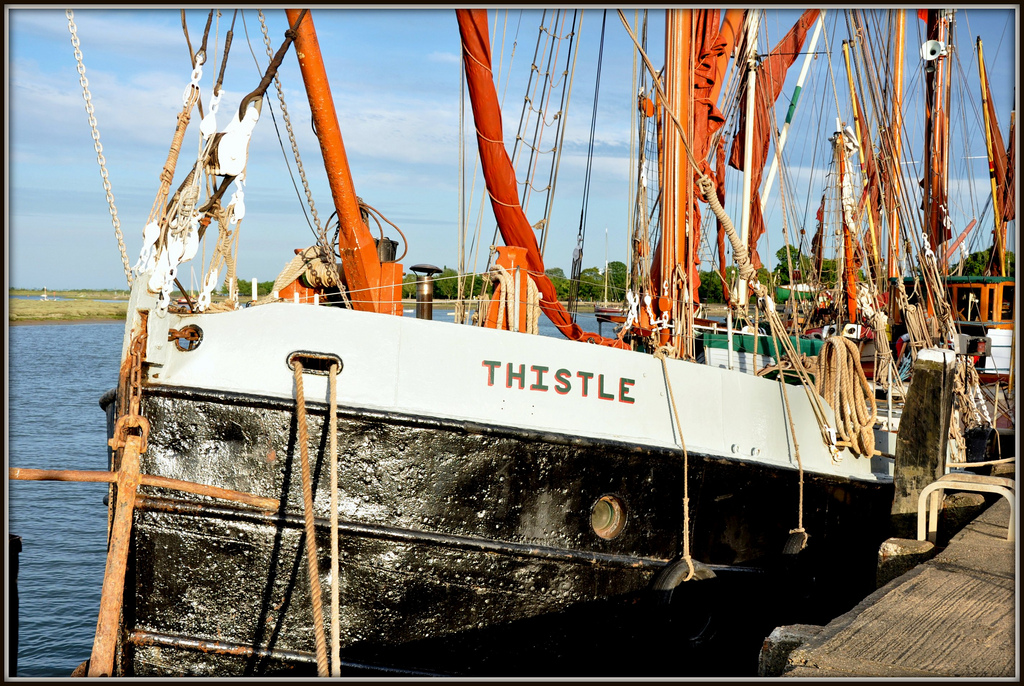 THISTLE was the only Thames sailing barge built in Scotland, and her name recognises her origin. She was built by William Hamilton & Co, of Port Glasgow, with a riveted iron hull, and is the oldest iron-hulled barge still sailing. She was completed in 1895 for H A Covington, a coal merchant of Battersea, London, and traded regularly from the Humber to the Thames. THISTLE could carry 150 tons on coastal voyages, or 170 tons on the rivers.

Her skipper was Captain Anmer, from Shotley, who took his sons Stanley and Jimmy as mate and third hand respectively. Later Stanley left whilst Jimmy stayed on as mate. In 1940 THISTLE was sold to the London and Rochester Trading Company. In 1948 her metal sprit bent whilst on passage and, having no engine, she was towed back to Rochester where her sailing gear was taken out and she was converted to a motor barge with a 66 bhp Kelvin engine. She continued to trade until 1972 when she was sold to Barry Bowes, before being sold on to Angela Olson in 1978 and to H C McLaren in 1979. During the 1970s she was a houseboat on the Medway. A restoration was started at Woodbridge in 1980, but she was then laid up for five years near Battersea Bridge as a houseboat, before further restoration to sailing condition followed at Greenwich in 1987. Her first charter was in 1988.

She is now availble to charter through Topsail Charters – www.top-sail.co.uk/

Based at Maldon, Essex