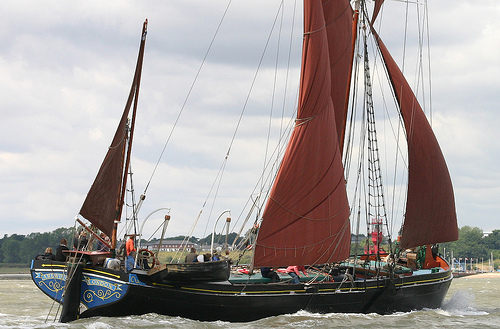 Her known history shows her to have been owned by E L & W Goldsmith, sold in 1938 to Metcalf Motor Coasters Limited and in 1951 to Daniels Bros (Whitstable) Limited.

For much of her working life she was in general trade on the East Coast and London. She was abandoned at sea in 1938 and recovered by Ocean Salvage. Subsequently she was engaged in the stone trade from Portland to Greenwich until 1952 and was a houseboat at Chelsea in the 1970s.

She was converted to a barge yacht in 1959 and refitted in 1970 and 1989/90. Her present owner acquired her in 1980 since when she has been raced and sailed and was champion barge in 1982. She is based in St Katherine Dock, London where she is lovingly attended to by her master, Gordon ‘Willie’ Williamson.

Based at St Katherine Y.H.