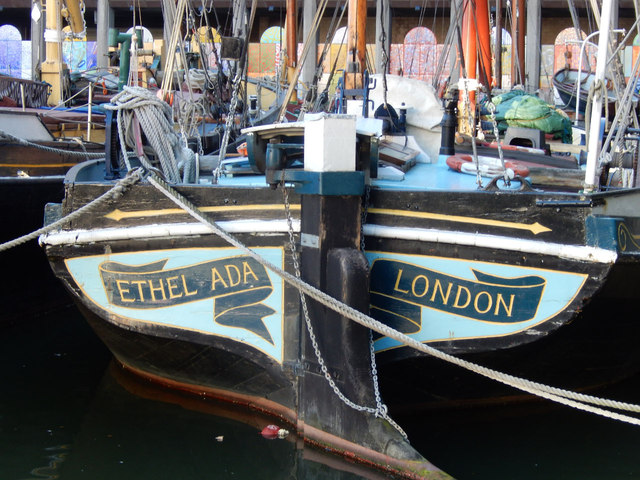 ETHEL ADA was built as a speculation by the Shuttlewood brothers of Paglesham, Essex, one brother building the port side and the other the starboard side, each assisted by one boy; and they named the barge after the ladies in their lives. Construction, in oak with a single skin, started on 15 October 1903 and the barge was launched on 30 July 1904. She was a snug fit in the building shed and to launch her the brothers took the tie-beams out of the roof so that one end of the barge could be jacked up to get the ways under her on a slope.

Whilst under construction she found her first owner in G & A Underwood, coal and corn merchants of Southend, and under their colours won the 1904 Southend match despite an enormous racing spinnaker pulling the topmast out of her during the race. ETHEL ADA was subsequently owned by Samuel West Ltd from 1915, TF Wood Ltd, of Gravesend – carrying gunpowder – from 1938, the Successors to TF Wood Ltd, and finally ICI, before ending trading in 1957.

Geoff Mellor purchased her in 1969 and lived on board for ten years at Pin Mill whilst also carrying out essential repairs and restoration. During the 1980s, after further restoration work and the installation of a diesel engine, she started a new working life as a cruise barge and was based at Snape on the River Alde, Suffolk. Ownership passed to Jed Green, with whom she was a regular competitor in barge matches during the 1990s. In 1999 she was sold to Oliver Price and was refitted and repaired by Webb’s of Pin Mill, leaving there on 1 September 2001 for Maldon to be re-rigged with new running rigging and a new mainsail and mizzen.

She is now a static housebarge in St Katherine Yacht Haven


Based at St Katherine Y.H.