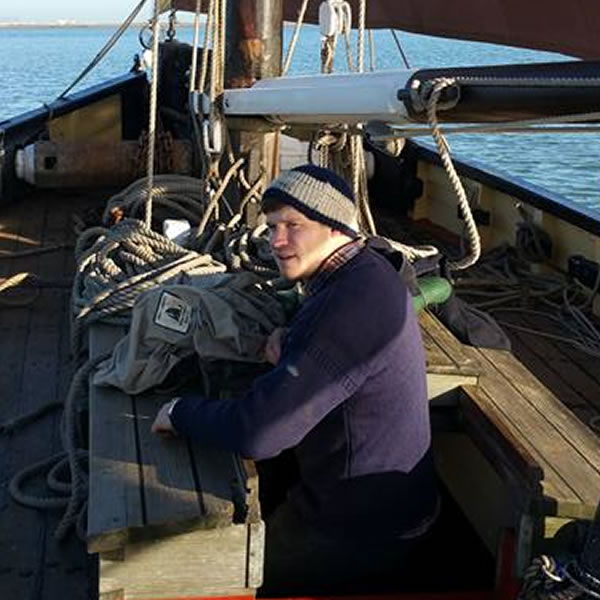 The Thames sailiing barge Edith May was built for her original owners, William Barrett of Leytonstone and Captain Howard, her first skipper, before being sold to Alfred Sully, who managed the barge from just after the Great War. The barge continued in the ownership of Sully’s throughout her working life, carrying cereal products, wheat, barley etc between East Anglia and London. Her largest cargo was 133 tons of Manitoba wheat, but more typically she would carry around 120 tons.

In 1952 an auxiliary engine was fitted and from this time until she was sold out of trade, in January 1961, she operated as a motor barge, skippered by Bob Childs, a local bargeman. Bob in his retirement, wrote the book, “Rochester Barges” a must for all literary enthusiasts on barging matters.

Edith May at Heybridge Basin during her trading years.
Edith May was built for racing as a medium sized coasting barge and is amongst only a handful of barges to have been built with a rockered bottom to enhance performance. The late Vernon Harvey bought the barge from trade and she was rerigged with the gear from the famous racing barge, “Veronica” when her career ended in 1963. Regarded as a latter day racing Queen, the “Edith May” dominated the Sailing Barge Matches of the 1960’s, 70’s and early 80’s and to this day her reputation is still revered amongst bargemen.

During the mid 1980’s, the barge was sold and completely refitted for charter work moving from her

Edith May. converted to a motor barge at Colchester, September 1957
base at Maldon in Essex, to Liverpool Docks, where she remained for approximately three years, undertaking promotional work.

The barge returned to the East Coast in 1988 under new ownership, continuing to operate as a charter barge, based at Maldon and St Katherines Dock in London. Unfortunately, during this period, essential maintenance work was neglected and by the mid 1990’s, the barge had fallen into sad disrepair.

Acquired by her new owner on 7th October 1999, the barge is now berthed in Lower Halstow Dock and the comprehensive programme of restoration work is

Shipwright Mick lays the new steering deck.
complete. Virtually all of the major restoration work has been undertaken using reclaimed materials and timber.

Since re-launching in 2010, Edith May now undertakes a very busy summer sailing schedule, attending the Rochester Sweeps and Dickens Festivals and successfully competing in the 8 annual barge matches. In three seasons racing, she has finished 2nd in the Championship twice (2011 and 2013) and won it in 2012.

2012 was a year to remember for Edith May, as she attended the Queen’s Diamond Jubilee Pageant and was made National Historic Ships ‘Flagship of the Year’.

To see more pictures about the history of the Edith May please visit the Gallery..